HiPep Laboratories was founded for development of novel biochips with designed peptide arrays, research and clinical application of novel active peptide, application of peptide to biomaterial and development of drugs. Parallel performing own R and D, consultations and contract basis R and D. Additionally we provide compound library and related devices/ instruments & reagents.

Through our research and development in biomedical science, we would like to contribute to early detection, prevention and effective treatment of diseases which will help QOL improvement, including development of human resources. By taking advantages of founder’s career and proficiency, we are proceeding interdisciplinary research and business collaboration and expanding world wide. 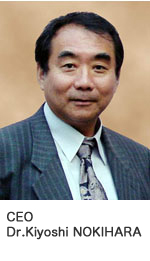 The CEO and CSO of the HiPep Laboratories, Dr. Nokihara, initially studied Organic Chemistry and Chemical Engineering in Tokyo, followed by many years of academic research in Germany. His involvement with bio-molecules commenced at Deutsches Wollforschungs Institute at the Technischen Hochschule Aachen (1973-1979).

In 1980-1985, he was Assistant Professor of the Faculty of Pharmaceutical Sciences, Shizuoka Prefectural University, where he undertook extensive research on brain-gastrointestinal peptides, syntheses as well as immunochemical and endocrinology studies. He subsequently relocated to the Faculty of Medicine, University of Heidelberg in the role of visiting Professor, and later at the GBF (German Research Centre for Biotechnology).

In 1990, he joined the Shimadzu Corporation, as a General Manager in R & D of the Biotechnology Instruments Department and Head of the Life Science Center. He has developed several novel instruments focusing on applications, including the simultaneous multiple automated peptide synthesizers, for which his team received a prize bestowed by the Japanese Agency of Science and Technology.
His expertise was focused on the biochemical and medical fields, especially proteins and peptides, from isolation, synthesis and characterization to biochemical and medical applications. As well as his business commitments he received visiting Professor positions at the Tokyo University of Agriculture and Technology and the Tokyo Metropolitan Institute for Neuroscience Research to continue his academic research.

In 1997, he founded Shimadzu Scientific Research Inc. and established a novel research business as the Chief Scientist.

In 2002, he has independently founded a new venture company, the HiPep Laboratories, based on his knowledge and experiences in bioscience. He is now a visiting Professor in Nanjing Medical University (China). He has more than 250 publications and 130 patent applications.